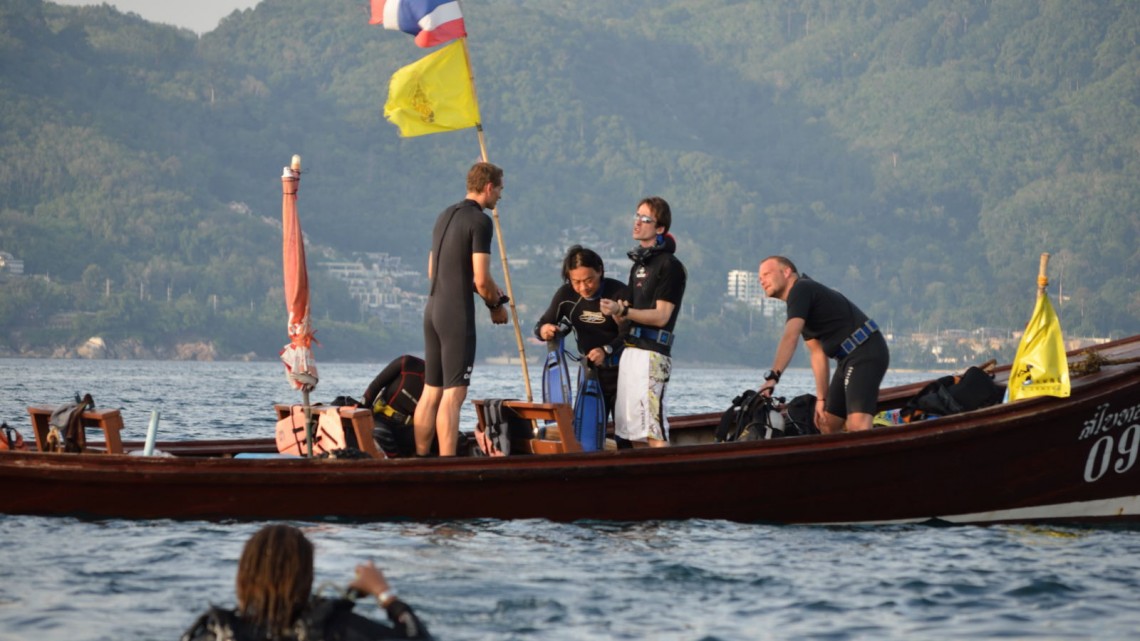 Recently visiting Phuket in southern Thailand for the first time, Pierre-Yves Cousteau, youngest son of the legendary French oceanographer and marine conservationist, Jacques Cousteau, participated in a series of events promoting the conservation of the marine environment.

Supported by the sponsorship of the IndoChine Group,  CousteauDivers.org , the non-profit foundation founded by Pierre-Yves Cousteau – conducted a series of events over a period of 4 days on the island and nearby waters, including a number of exploratory dives , meetings with the local dive industry, workshops for students, and a gala dinner at IndoChine Villas & Resort. Michael Ma, the founder and head of the IndoChine Group has been a passionate supporter of environmental issues and marine conservation for many years, and actively supports other non-profit groups such as IUCN ( International Union for Conservation of Nature).

Pierre -Yves Cousteau has envisioned Cousteau Divers to be a global collaborative project for divers at all skill and experience levels to contribute observational data collected on dives into a global database to measure the relative health of the oceans and marine life and promote the conservation of the marine environment.

The small team of divers and observers left from Kalim Beach in a pair of traditional long-tail powerboats and proceeded across to the southwestern coastline of Patong Bay. In the somewhat murky waters of Patong Bay the divers witnessed the detrimental effect that proximity to a large urbanised population can cause to the marine environment- with a noticeable lack of living corals and also limited fish species and populations. On completing the dive in the darkness after sunset, the small flotilla proceeded to Surin Beach where a welcome dinner was arranged at the IndoChine Surin Beach Club. Guests included sponsors, media and representatives from local marine and national park authorities.

Day two started early with a transfer from IndoChine Resort & Villas to the Rassada Pier to board the dive boat “Reef Ranger” operated by The Adventure Club at Phi Phi Island.

A series of three dives at different locations in the waters around Phi Phi Islands were planned for the day- with the first dive at Shark Point Marine Sanctuary. In the clearer offshore waters of the Andaman Sea a much richer diversity of living corals and fish species was evident, although a noticeable lack of larger size fishes was observed. Whilst cruising to the next dive site, and accompanied by a lunch of freshly cooked Thai dishes, Andrew Hewett the owner of  The Adventure Club, made a presentation on his voluntary non-profit program to establish coral nurseries in the waters of Phi Phi, and ended with some graphic images of the devastation to Phi Phi region wrought by the 2004 tsunami.

The second dive location was at the southern end of the Phi Phi islands group- at the stunning twin limestone outcrops of Koh Bida Nai and Koh Bida Nok. In waters ranging from 15m- 30m depth, the divers observed a good variety of soft and hard corals, and many schools of small fish species. A highlight was an encounter with a leopard shark resting peacefully on the seabed.

The final dive for the day was at nearby Koh Phi Phi Ley- in shallower waters under the towering sheer cliffs of the island. This was the location of the coral nurseries that have been established for a number of years now, and also an artificial reef, created from stacks of large concrete blocks, that is attracting increasing marine growths and a protective habitat for small fish species. The day’s diving ended with some encouragement about the recovery progress evident in the reefs around Phi Phi Island, but with obvious challenges remaining to achieve a sustainable marine environment for both leisure divers and tourists.

The third day started in a busy central Patong soi, at the open pool and dive school of All4Diving– where students from the Headstart School were introduced to “My very first dive”. Here the students were joined in the training pool by Pierre-Yves Cousteau and the instructors from All4Diving, and the fundamentals of diving were explained- the enthusiastic students were then given the opportunity to immerse themselves in the underwater world for the first time.

The next destination was AoPo Pier on the eastern coastline of Phuket Island- where the “MY Calisto” – sister ship to the famous exploration vessel “Calypso” of Jacques Cousteau, was at anchor offshore- and was to be the venue for a press conference with both the IUCN & Pierre-Yves Cousteau. The “Calisto” has been restored and maintained in the pristine condition of a luxury motor yacht of the 1950’s and has a strong historic connection with the Cousteau family.

After a welcome address by the current owner, and some background to the origins of both “Calisto” and “Calypso” , press conferences were conducted with both Dr. Robert Mather, SE Asian head for IUCN, and Pierre-Yves Cousteau. The main subject was the issues facing the conservation of the marine environment in the seas around Thailand, and how through collaboration and unifying the efforts of interested stakeholders, a stronger message could be communicated to decision makers in government. At the conclusion of the press conference, lunch prepared by the kitchens of IndoChine was served and “Calsito” cruised down the east coast of Phuket to Chalong Bay and the Phuket Marine Biological Center where the passengers disembarked.

The same evening, a meeting was hosted at IndoChine Villas & Resort for local members of the Thai Divers Association (TDA). After an introduction to the functions and policies of the TDA, Pierre-Yves Cousteau outlined the program of Cousteau Divers.org and how by working together a unified message could be transmitted to the management of the marine national parks. Members of the TDA expressed some deep dissatisfaction with the management of the marine parks- with reports of extensive fishing by commercial interests within the Similan Islands marine parks.

The final day’s activities commenced with a visit to the impressive facilities at Phuket International Academy at the northern end of the island for a students’ workshop on marine conservation. After a multi-lingual welcome from the students, Pierre-Yves Cousteau showed excerpts from a film recorded in the waters around the Similan Islands by his father in the early1990s. The message from that film resonated closely with what is currently being experienced in the marine national park- over-exploitation of a sensitive marine environment by destructive commercial fishing methods. Pierre-Yves explained to the students his vision for CousteauDivers.org as a collaborative project that would enable the current generation of students to contribute their passion for conservation of the environment to a global effort. The target set by Pierre-Yves would be to have an area representing 20% of the total ocean surface to be set aside as protected marine parks- an ambitious- but not unachievable target given that current marine parks represent just 1% of the world’s oceans.

Dr Robert Mather then made a presentation on the work of the IUCN in the Thailand coastal regions- including the re-growth and protection of coastal mangrove swamps, and the creation and monitoring of marine national parks. There was an active exchange from the students with many questions being fielded by Pierre and Robert.

The week’s events finished up at the IndoChine Waterfront Restaurant with cocktails and a Gala Dinner- and speeches by Mike Ma of IndoChine Group, Pierre-Yves Cousteau, Robert Mather of the IUCN, and Khun Ronnachai Chindapol, the president of the Thai Divers Association. An impassioned discussion from the audience ensued, with the conflicting interests of Thai commercial fishermen and the foreign dive operators, alleged corruption in National Parks management, and the lack of enforcement of “no take” regulations in the marine parks being the hot topics. In a significant move to unify the voice of the Thai dive industry, the president of the TDA announced the decision for the TDA to formally connect with CousteauDivers.org .

This proved a popular move and was greeted enthusiastically by the large audience- and signified a successful conclusion for the first visit by Pierre-Yves Cousteau to Phuket. The task ahead to reconcile the conflicting commercial interests and work towards the targets of both expanding the areas under marine national parks, and also the effective supervision of these parks remains a daunting one, but ultimately must be resolved by all stakeholders, as the failure to do so will result in the collapse of both sustainable fisheries, and the local dive tourism market- at considerable financial cost to the Thailand national economy. 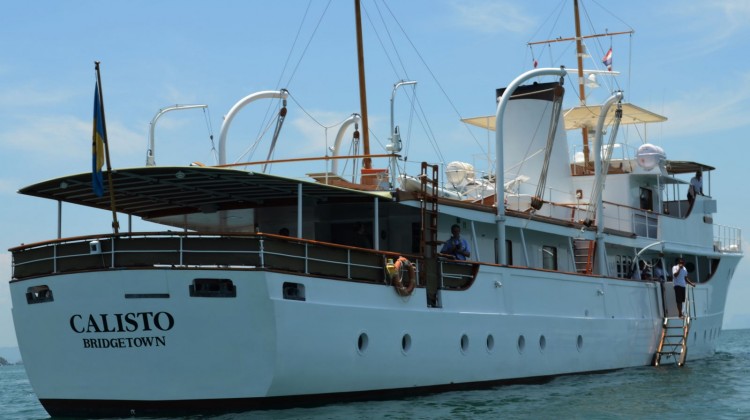 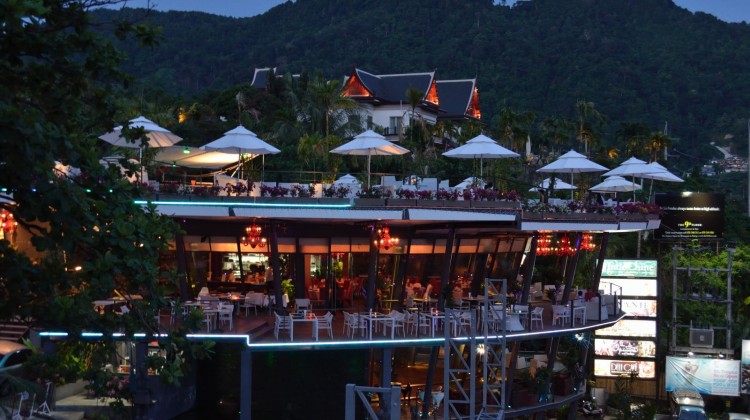